Where Is My Island

I’ve been playing Animal Crossing: New Horizons lately, where my in-game character flew to a deserted island in order to start a new life. Despite its cartoony art style, the game manages to establish a remarkable degree of realism, to the point where it almost feels like a living and breathing world. For example, I know for a fact that my island exists somewhere in the northern hemisphere; I know that the sun rises and sets there every real-world day; I know that the season shifts and spring is coming. At some point, I began to wonder how much further I can push this, e.g., given what’s observable in the game, can I deduce where my island is? If so, where might it be?

In this post, please join me for a tour to my island, and I will unveil its location at the end (sort of).

This is an easy one. Due to the fact that the game runs on real-world clock, my deserted island has to be conveniently located in the same time zone as where I physically am (or at least wherever my system is set). Voila! There it is and it can’t be too far off.

Unlike the previous case, figuring out the latitude can get a little tricky. In a nutshell, it boils down to measuring the solar elevation angle at solar noon. Astronomy tells us that the following equation holds true: 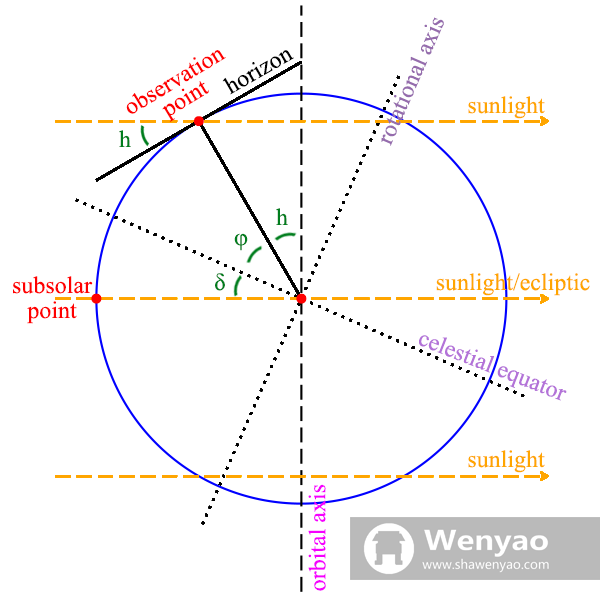 There’s yet one more challenge before we can pull this off in Animal Crossing. Because of the distortion introduced by the camera perspective, it’s not always obvious when the shadow of an object reaches its minimum in the game. That is, until you can afford a playground gym.

This baby will set you back 3000 Nook Miles, but oh boy is it worth every mile. Since I am reasonably confident that it’s made of little cubes, the playground gym forms some kind of orthonormal basis in a three-dimensional coordinate system when being placed on the ground, allowing distance to be estimated reliably on a relative basis.

The rest is straightforward but definitely not trivial. While my in-game character was enjoying his time on the swing, I ended up doing all the heavy lifting myself -

Now we get to observe where my island is on the globe, and in the absence of further evidence, I tend to believe that it also applies to the rest of the Animal Crossing players who happen to share the same northern hemisphere with me (i.e., same latitude but different longitude). Still, I am absolutely appalled to find that I am literally within 0.5 degree away from where the prediction says in terms of latitude.

But there’s a minor problem. There isn’t any island there!

This is Part I of my Animal Crossing post series. For Part II, see here.